Lone Wanderer Entertainment announces the launch of the Kickstarter for the book, The Ferryport Adventures.

Written by Michael Bielaczyc and Dane Clark Collins, the Ferryport Adventures is one part adventure, one part city guide.

What is in the book?

The Ferryport Adventures will include two different books under one cover:

The first is the Guide the Ferryport.

The city of Ferryport, a crossroads city, is a great base for adventures in Uteria. It was not as ravaged by the Great War or plagues as many places. It is a central trade hub for the Endamas region, so many people and cultures are present within its walls.

Today, magic is returning, bring both the splendor and horror that comes with it. Ferryport sees a new dawn in its future, but a sinister force lingers in the dark corners of the city

The Guide to Ferryport will be a journey through the streets of Ferryport, as seen through the eyes of Toryn, a traveling bard who has returned to his hometown to report on its places and people. It will cover the interesting personalities of Ferryport, as well as its most well-known locales. Maps will be included for many locations.

The Goblins of Kaelnor Forest – Adventure

This first level adventure will take the adventurers into the Kaelnor Forest. While the eastern side of the forest has long been the home of the forest elves, the western side is infested with goblins, boggarts, spiders, and more.

The adventure will take players through the forest investigating a rumor of raiding creatures. They will begin in South Hollow, a farming community south of Ferryport proper, and will travel deep within the dark, enchanted woods.

Are there supernatural creatures in the woods taking the farmers’ stores? Will they survive the strange fey forest?

The adventure will come with 5 premade Uteria player characters, so you can jump right into the story.

The Worlds of LWE 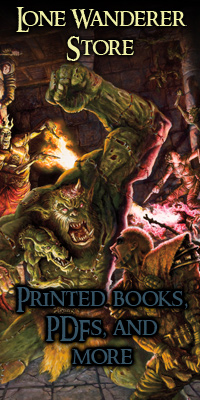